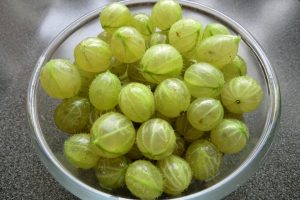 Gooseberries seem to do well in Cheshire, with its relatively mild climate and fertile soils.  It’s not thought to be native to Britain, but records show it was used here as far back as the 16th century.

It’s a very versatile fruit (and is rich in vitamin C), and can be used in desserts like gooseberry crumble, gooseberry fool gooseberry pie.  Gooseberries are also rich in pectin, making them ideal for jams and jellies.  Gooseberry curd makes a pleasant change from lemon curd and can easily be made in a microwave.  The sharp flavour of gooseberries goes well with oily fish like mackerel or meats like duck.  Gooseberries also make great chutneys and preserves that go well with Cheshire cheese:

A bit of history

The gooseberry had a peak of popularity in Victorian times.  In 1831 there were 722 varieties of gooseberries grown, and in 1845 there were 171 gooseberry shows registered.  Today the number of shows is down to around 8!   There is a gooseberry show in Egton Bridge (North Yorkshire) and all the rest are in Cheshire.  Together the Cheshire shows have formed the Mid-Cheshire Gooseberry Shows Association.

Two people are particularly famous in gooseberries circles.  The first is Frank Carter, who lived at Toad Hall (near Jodrell Bank) which is now home to the Blackden Trust.  Frank is legendary among gooseberry growers for developing seventeen new gooseberry cultivars.

Kelvin Archer, who is head gardener at Rode Hall, won the world record for the biggest gooseberry (a Frank Carter Variety – Montrose) in 1993 weighing 61.04g.  He held the record for 16 years, until 2009, when an entrant of the Egton Bridge took the record with a gooseberry weighing 62.01g 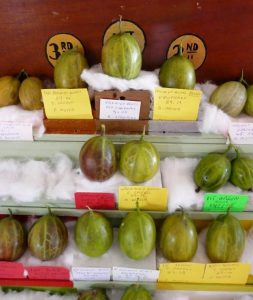 In mid-Cheshire they still have Gooseberry Shows. The competion is fierce and special equipment is used to store and weigh the gosseberries. Click here for more information.

You can also buy delicious gooseberry jam, or gooseberry and elderflower jam and sweet gooseberry and red onion chutney made by Celia and Pam Toler (the Jam Family) at Yarrangall Green Farm on the Sandstone Trail.

You can try Kelvin’s Gooseberry Chutney in the Tea Rooms at Rode Hall.

Besides containing Vitamin C, gooseberries contain antioxidants known as anthocyanins.  It’s though that they may have anti-inflamatory properties that help your heart, blood vessels, nervous system and brain, and may also help to fight cancer.

Isn’t it time we had a gooseberry revival?