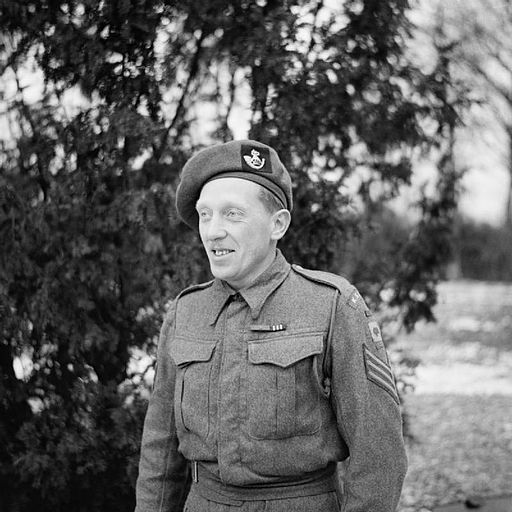 George Eardley first came to my attention when I was investigating a tragic accident that took place at the level crossing by Nantwich station.  Local historian, Andrew Lamberton, kindly sent me his obituary, from 1992 – which I found fascinating and have reproduced below:

GEORGE EARDLEY, VC, who had died aged 79, won the Victoria Cross during the North-West Europe campaign in Holland in 1944.

On Oct 16 Eardley’s platoon was ordered to clear some orchards east of Overloon, where a strong German force, including paratroop machine-gunners, was holding up the general advance. When 80 yards from the objective, the platoon encountered intense enemy fire which swept the area of advance and inflicted severe casualties.

Eardley spotted the position of one machine-gun post and, although it was virtually suicidal ‘to emerge from cover, dashed forward with a Sten gun and killed all the occupants with automatic fire and a grenade.

He then observed the position of the second post, which was firing rapidly and accurately. Having charged another 30 yards over open ground, he killed all the enemy in it, including an officer.

Another section then attempted to move forward but, after losing half its men, was forced halt. Eardley ordered his own section to lie down and take cover while he crawled forward by himself to a third enemy position which he then destroyed with a grenade and Sten fire.

The advance was then resumed successfully. Eardley’s feat was astonishing by any standards because the enemy-fire was so relentless and accurate that it seemed impossible for anyone to stay alive in it, let alone destroy its main sources.

This was not the first time Eardley had shown outstanding courage and initiative. On 1 Aug 1944, at Beny-Bocage in Normandy, as a member of a reconnaissance patrol, he became separated from the others when a machine-gun opened up, as they were moving along a hedge.

Eardley pretended to be hit.  Then, when attention was diverted from him, he stalked the machine-gun post which he destroyed with two grenades and Sten gun fire. He was awarded the Military Medal.

A printer’s son, George Harold Eardley was born on May 6 1912 at Congleton, Cheshire, and educated locally, On leaving school he joined the print room of the Congleton Chronicle.

In March 1940 Eardley volunteered for the Army and joined the Queen’s Royal Regiment. ‘In July 1944 he  transferred to the 4th Battalion of the King’s Shropshire Light Infantry, which took part in the Normandy invasion in 159 Infantry Brigade, 11th Armoured Division.

At the time he won his VC Eardley was still ranked as a private, acting sergeant; later he became the company sergeant-major.

At the investiture for his VC at Buckingham Palace in February 1945, he was greeted warmly by King George VI who expressed his pleasure at meeting a VC who was still alive as so many were awarded posthumously.

Eardley was offered a glass of sherry by King, and in the event had two; the King, however, confined himself to half a glass, saying he could not exceed it as he was on duty.

At the end of the audience Eardley inadvertently walked out of the room through the wrong door and, as he emerged from the other side, was taken aback to find himself on a dais in front of a large gathering.

The band, under ‘the impression that, when the door opened, the monarch would appear, struck up the National Anthem. On this occasion Eardley retreated hastily.

After the war he served in various training establishments such as the Infantry Training Centre, the RM Centre and OCTU Battle Camp, as well as in the Far East.

On his return to civilian life in 1950, he qualified as an electrical engineer and worked for Rolls-Royce. In June 1964 Eardley was involved in a horrendous accident. As he drove over a level crossing at Nantwich his car was hit by a train which crashed through the barriers that were not functioning correctly. His wife, Winifred, was killed and he himself had to have his foot amputated on the site without an anaesthetic.

Although crippled, he returned to work with Rolls Royce.

Subsequently, he married Nancy Barnett, his former teenage sweetheart, who survives him with a daughter.