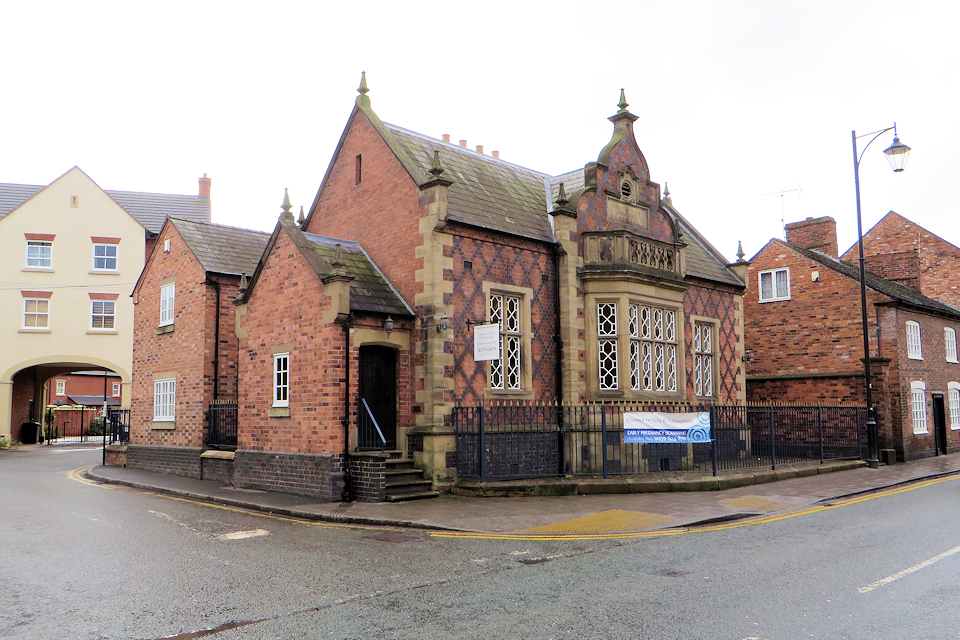 Some of the banks in Nantwich today are situated in delightful and historic old buildings.  However you may be surprised to read about banking in the past in Nantwich. This is a tale of banks going bankrupt and Nantwich having its own illegal currency!

The first bank in Nantwich I believe was situated on Hospital Street.  Local historian James Hall (when discussing a later bank called the Old Bank) tells us:

Though called the Old Bank, it was not the first Bank in the town. Some years before, Benjamin Hewitt, a wealthy shoe-merchant, had started one in Hospital Street at the house now occupied by S. H. Munro, Esq. M.D.  Mr. Hewitt died aged sixty-four, on 8th Oct. 1808; and his bank, which was afterwards managed by his son, failed in Feb.

Mr Hewitt had formed a partnership with Eddowes Bowman, who succeeded John Eddowes in the business of tobacconist and grocer in High Town, in the year 1789; from which he retired in 1812, and became a partner with Mr. Hewitt in a Banking speculation, that proved unsuccessful, and collapsed in Feb. 1816.

I believe the bank was in the building which is now known as Kiltearn House: 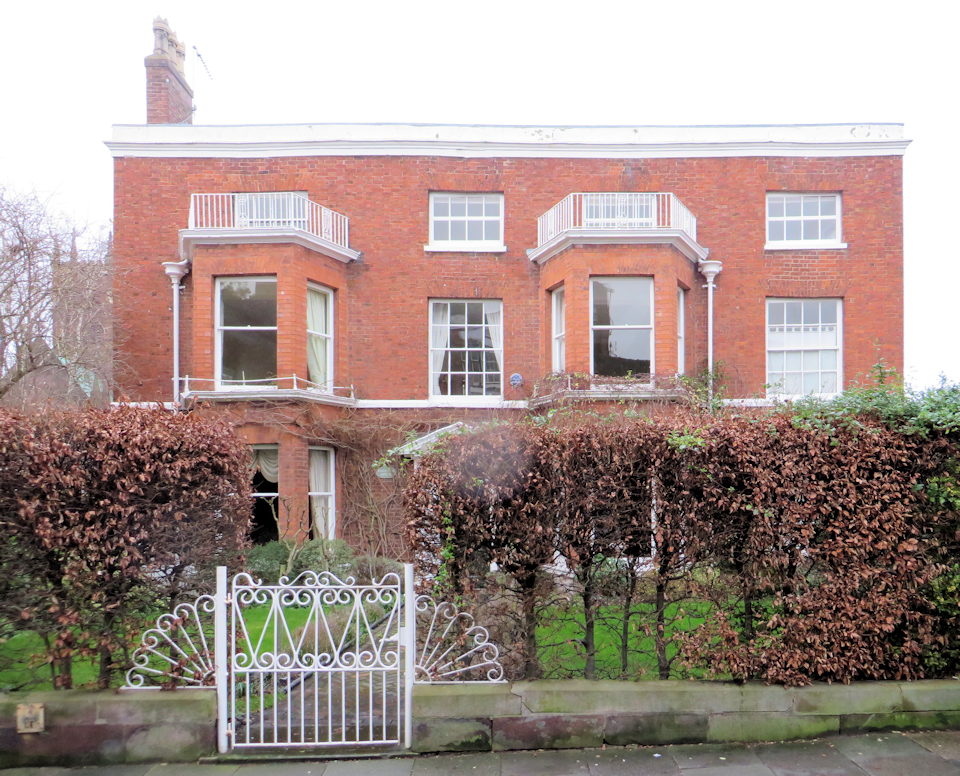 On Saturday, the 12th November 1808, the firm of Broughton, Sprout and Garnett opened a new bank, in High Town, in premises next to the Griffin Inn.  I think this could be 20 High Street: 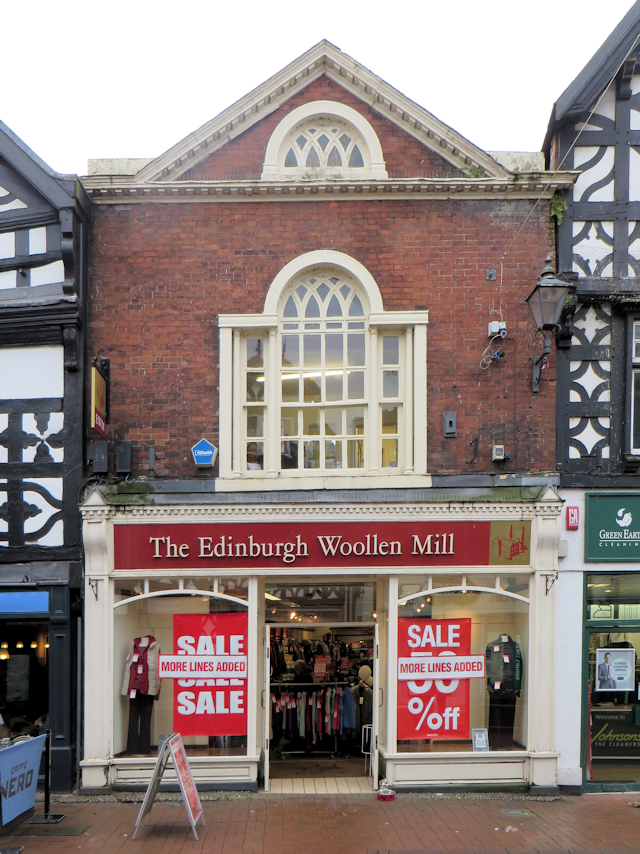 John Jasper Garnett started the bank in partnership with Charles Delves Broughton of Almington Hall, Staffordshire (the brother of Sir John Broughton of Doddington), and William Sprout. An oil painting of William Sprout used to hang in the Savings’ Bank, in Welsh Row (see below): 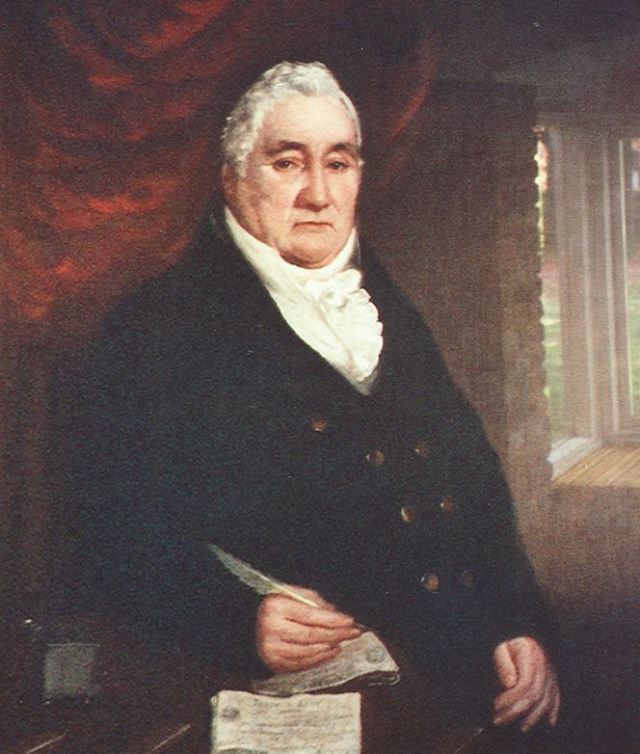 this picture is now in the Crewe Almshouses in Nantwich. If you look at the bottom of this picture, you can see the words “Nantwich Bank”: 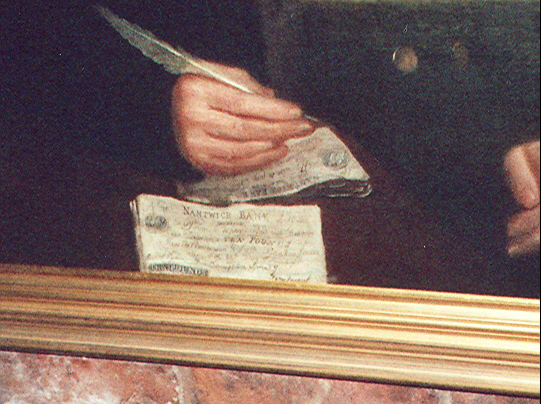 Found in a box of rubbish when an attic was being cleaned out, was this £l note: 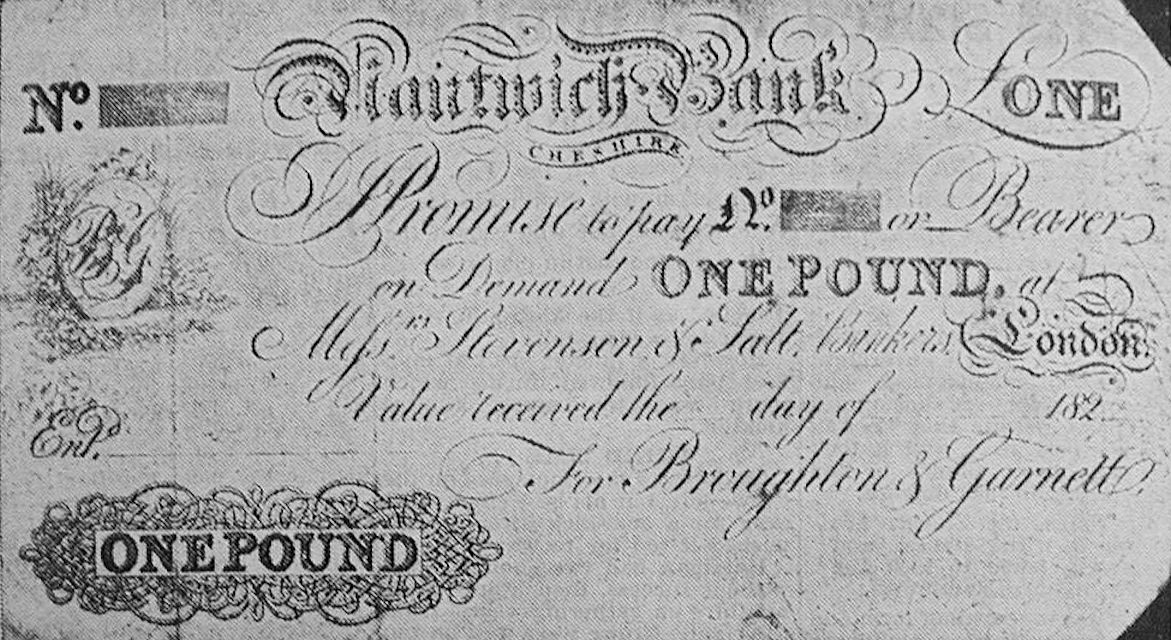 It was issued by the Nantwich bank. In those days each banker was allowed to issue his own banknotes. The note reads: Nantwich Bank, Cheshire, promises to pay No. or bearer on demand one pound at Messrs, Stevenson and Salt, Bankers, London, Value …….. received the day of ………. 182..- For Broughton and Garnett.

J W Platt (1818) in his book – Nantwich, In the County Palatine of Chester tells us a bit about banks in Nantwich at the start of the 19th century:

It is not an uncommon occurrence, that the first question asked by a visitor is, have you a bank in this town?” The motives which dictate the query are so various, that it is impossible to solve them. To the curious querist it probably may be of some importance to be informed, that the bank in this town is conducted by gentlemen of great property, and acknowledged probity. The gentlemen who compose the firm are, Messrs. Broughton, Garnett, and Sprout. On one side of the tokens issued this bank were the arms of the town (Vide the Armorial Bearings of Baron Malbedeng), surrounded by the words, “Nantwich Token, Value One Shilling.” In the centre of the other side, were the words, “At the Old Bank,” which were surrounded by the words, “One pound note for 20 tokens”. 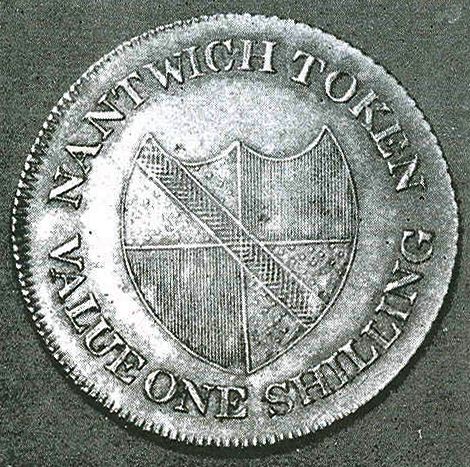 An interesting article by James Mays, in Cheshire Life in March 1972, tells you a lot about these tokens:

For a period in the reign of George III, though the nation was hamstrung for lack of silver coins, the government would do nothing. Ultimately, the business community took matters into its own hands and minted for itself.

Strictly speaking, these tokens were illegal. The article explains why they were made:

The 1811-12 silver tokens grew out of consumer needs brought on by the Industrial Revolution. Industry thrived, more jobs were created, there were great shifts in population from the land to the cities. The enlarged labour force had to be paid, and these people, in turn, used most of their earnings for food and clothing, The government was hopelessly inadequate to the task of providing the silver coins required for the trading boom which resulted from the industrial development.

Charles Broughton was a solicitor, which is interesting in view of what happens next.  The bank stayed in operation for some eighteen years, but was forced to close on February 13, 1826. This site tells us “The story goes that Charles Broughton had an argument with his brother, Sir John Broughton, and when the rent was due on the bank, Sir John refused to accept the Broughton-Garnett Bank notes – thereby causing a run on the deposits, and bringing about the bank’s closure”.

James Hall mentions the bankruptcy, when he tells us about a debt to Sir Edmund Wright’s Charities (which built the alms houses in London Road, Nantwich):

Mem. Nov. 24. Messrs. Broughton & Garnett Bankers having become bankrupt on 13th Nov. 1826, and being indebted to the Charities in a Balance of Cash in their hands with interest thereon £136 7s. 4d., and in Nantwich Notes in the Treasurer’s hands £13, making together the sum of £149 7s. 4d. The Treasurer in the succeeding accounts has only credited the Charities proportionably with the Dividends he has received on that account.” ” Wm. Afton, Treasurer.”

This sum would be worth millions today!

James Hall also tells us that on Wednesday, 8th December 1830, the Nantwich branch of the Manchester and Liverpool District Banking Company, opened in Barker Street, under the direction of Messrs. Robert Harrison, William Smith, of Stapeley, and Croudson Tunstall, of Alvaston.  I think this could have been at The Dowery: 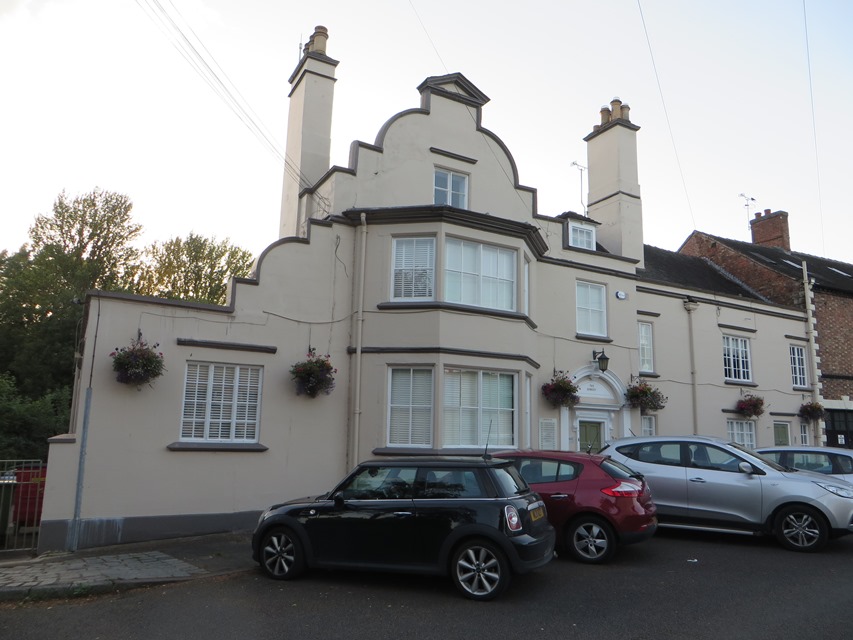 In Pigot’s Directory for 1834 the Manchester & Liverpool Banking Company are in Churchyardside, and Mare & Eyton and the Savings Bank are in the High Street.  Mare & Eyton are shown as being at 20 High Street, so appear to be in the premises occupied by Broughton & Garnet before they went bust.

In 1844 the Manchester and Liverpool District Banking Company acquired the Nantwich and Cheshire Bank, founded five years earlier.  This bank later became known as the District Bank, which later became a subsidiary of National Provincial Bank, and is now part of the National Westminster Bank (see Wikipedia for more details.

In 1846 the Savings Bank was built on Welsh Row:

A sign at the top of this lovely building, with roman numerals MDCCCXLVI – 1846, still commemorates the building of this bank. 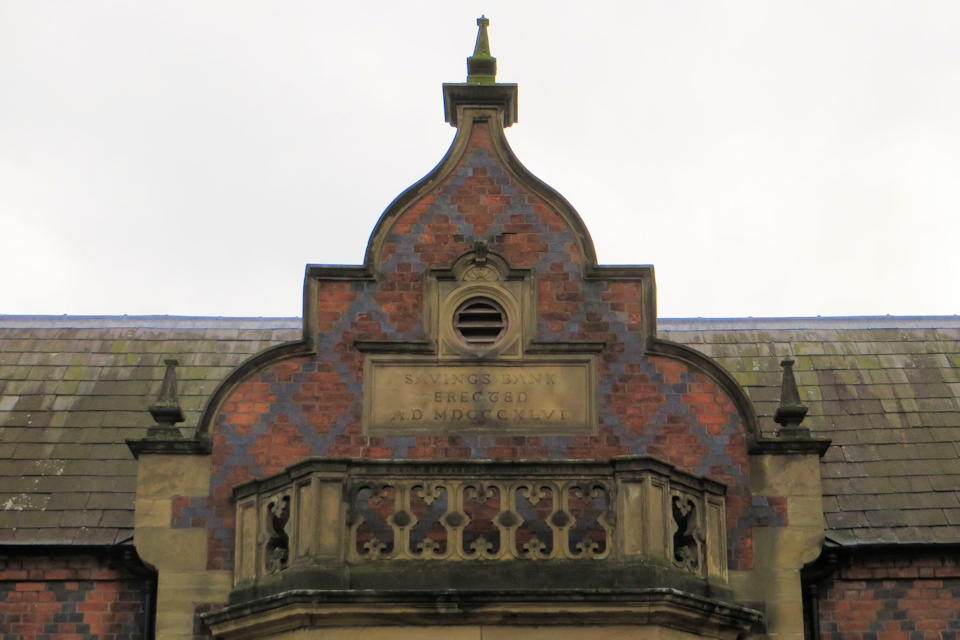 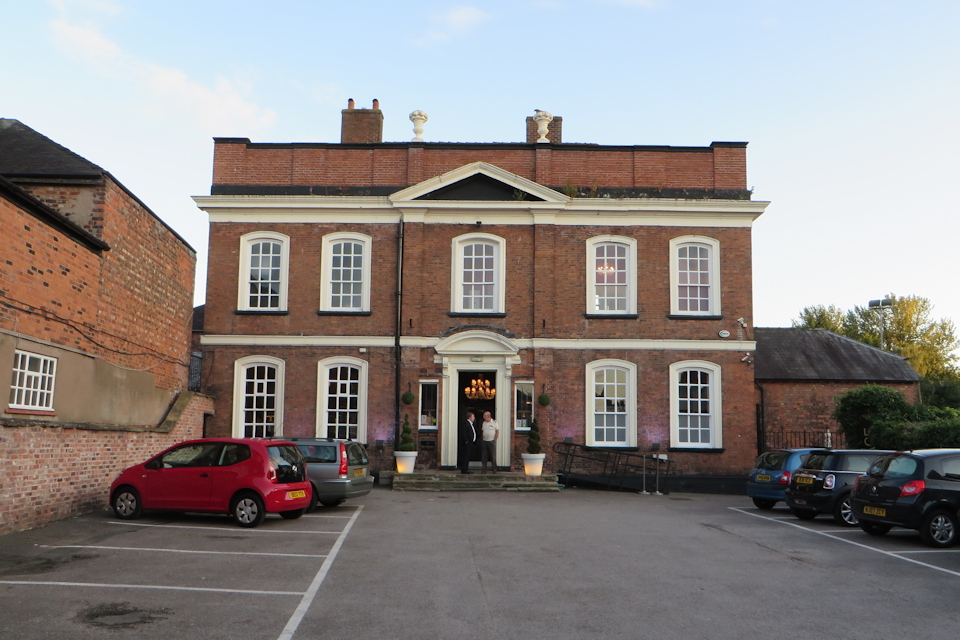 There’s a fascinating account of the life of as bank manager in Nantwich in Threads from the life of John Mills, banker (author of Vox Humana): interwoven with some early century recollections by his wife which was published in 1899 by Sherratt & Hughes in Manchester (there’s copies in Nantwich Library).

John Mills became the manager of the District Bank on the 1st January 1852, and left in 1864 when it moved. The book tells us:

When, in 1852, Mr. Mills went to Nantwich, the district bank there was, from causes needless to specify, in low water, with only one or two small sub-branches. After twelve years’ work he had the satisfaction of leaving it in first-rate and rapidly growing condition. Market Drayton and Crewe soon became independent branches, instead of sub-branches, and, best of all, he was able to say that during the whole period he had not made ” a penny of bad debt! “. That he carried with him the esteem and good
will of the community, was evidenced by the presentation to him of a fine bronze and marble clock and a silver epergne, on each being engraved the following:—

“Presented to JOHN MILLS, Esquire.
By his friends in
Nantwich, Market Drayton, Sandbach, and Crewe,
As a token of their esteem, founded on their
intercourse with him for twelve years, as
Manager of the District Bank in those towns.
May 1864.”

The subscription was limited to one pound, and the most gratifying element to Mr. Mills was the large
number of smaller spontaneous subscriptions from farmers in every part of the district.

It was not without pain that we bade good-bye to so many good friends, with some of the closest of
whom, however, we kept in touch, and with whom we exchanged pleasant visits. To the older of our
six children it was a terrible grief to leave the old house and garden, and it took a long time to reconcile them to their new surroundings. Had Mr. Mills only lived another year his heart would have
rejoiced to know that the Liberals had become strong enough to purchase the “old bank ” for conversion into a Liberal Club.

In 1864 the Manchester and Liverpool District Bank was in course of erection.  The building at 1–3 Churchyard Side is still a bank today (it’s now the TSB). 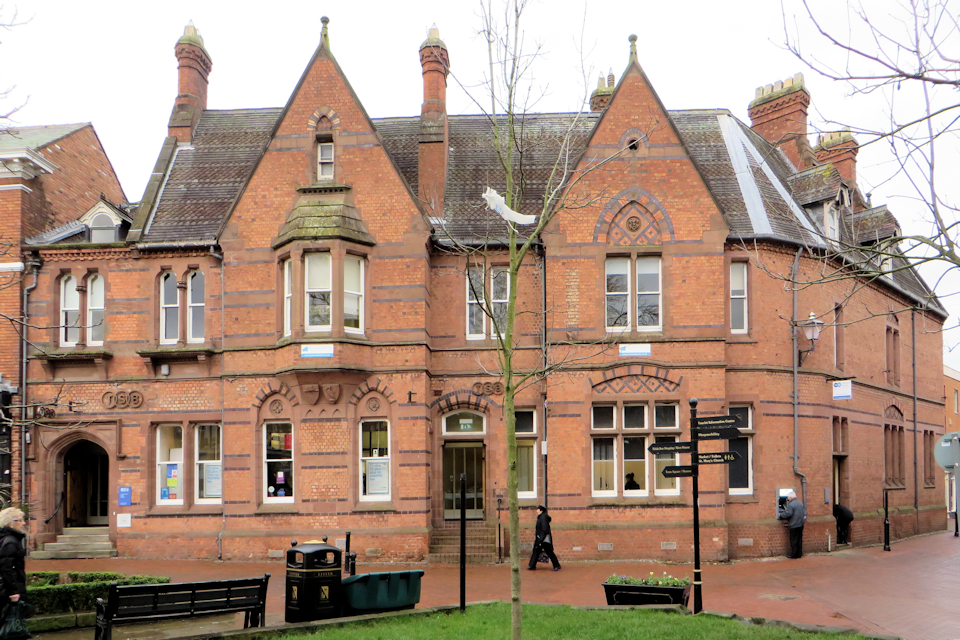 The architect was Alfred Waterhouse, Esq., of Manchester (who is well know for his Victorian Gothic Revival architecture and whose works include Manchester Town Hall and the Natural History Museum in London).  The contractor was Mr. Richard Beckett, of Hartford, and the sub-contractor was Mr. Thomas Bowker, of Nantwich. It was opened on the 2nd June, 1866. James Hall tells us:

“In digging the foundations for the present District Bank, coffins and remains were unearthed”. 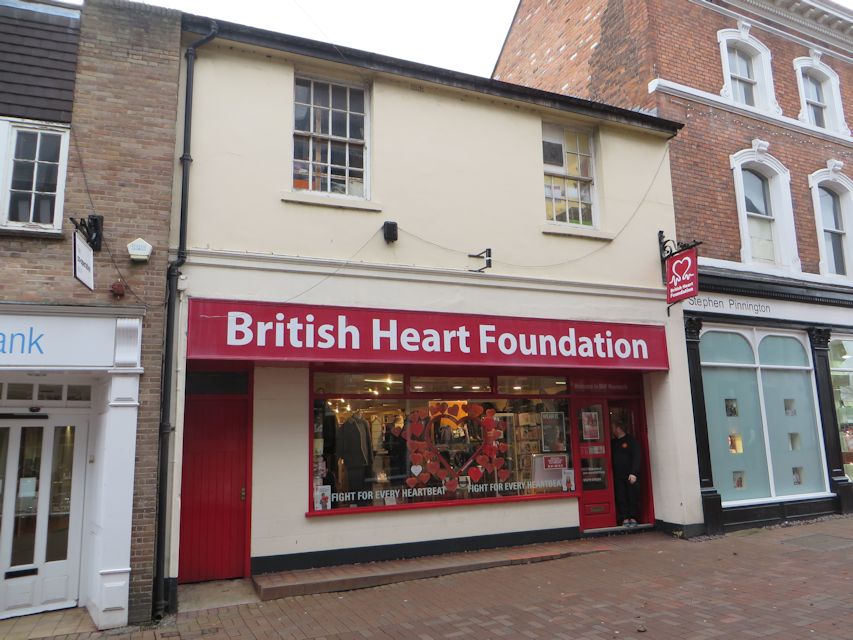 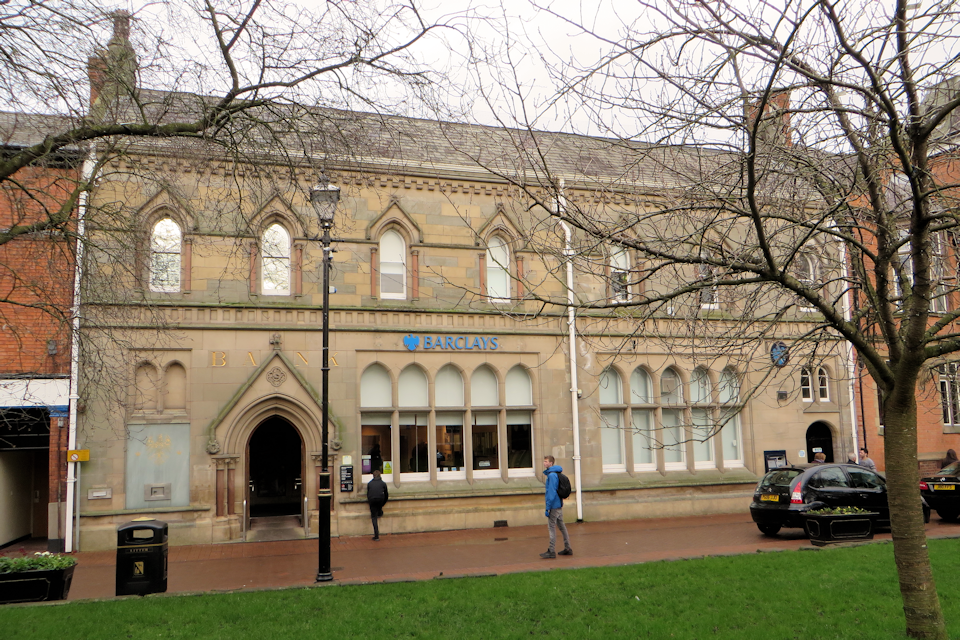 for the Midland Bank.  It’s still a bank today, now a branch of Barclays.

My thanks to Andrew Lamberton and Peter Jones for their assistance with the above.

This building, at 28 High Street: 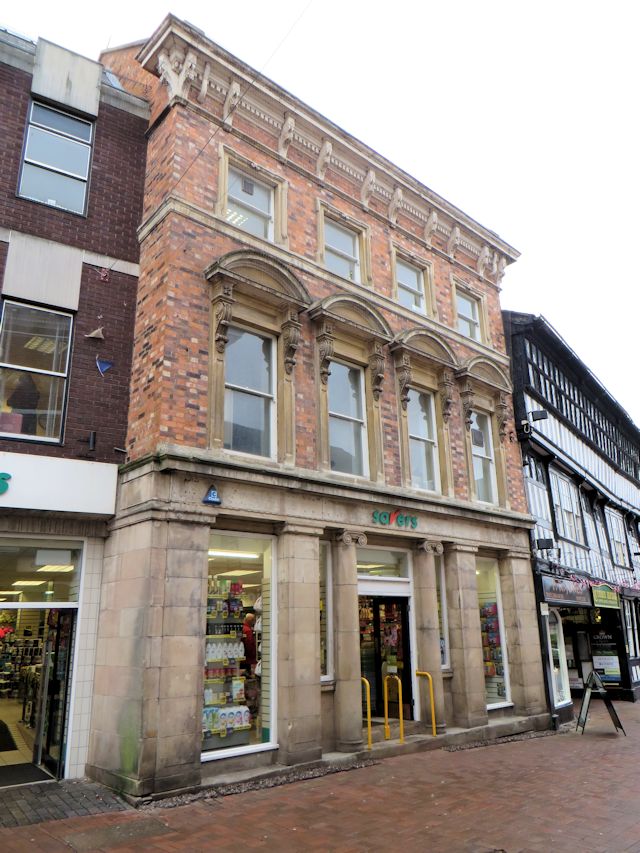 was built around 1900. It originally was a post office and later became the National Provincial bank.

This building, at 34 High Street, was Parr’s Bank: 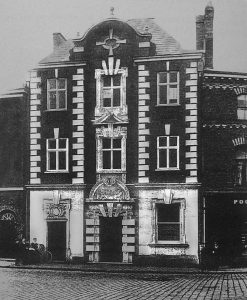 For a while there were two branches of NatWest next door but one to each other, as this picture shows: 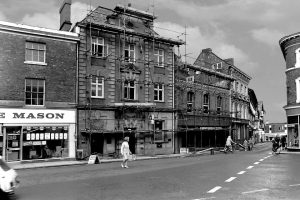 My thanks to John Hickson for supplying the above two pictures.

I’m told 21 High Street was a bank (I’m still trying to find out which): 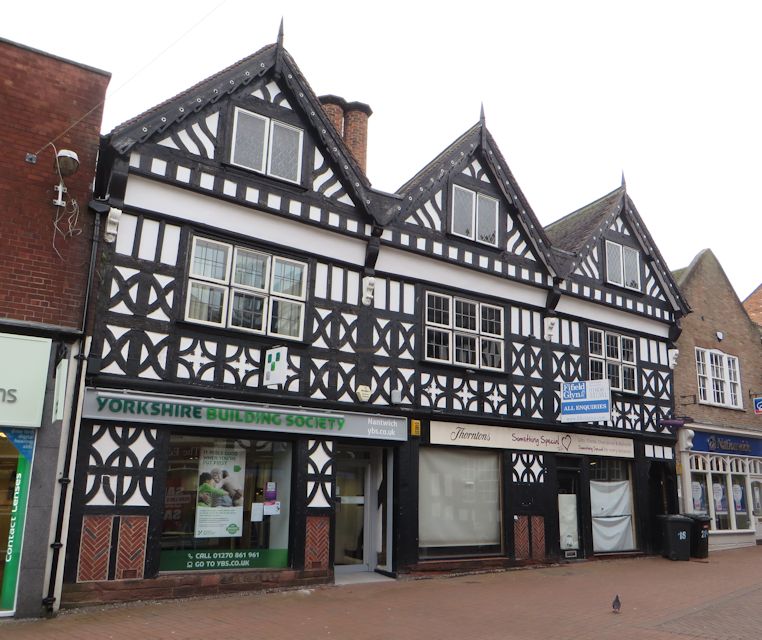 and next door (23 High Street) was Martins Bank.

Please get in touch if you have more information.