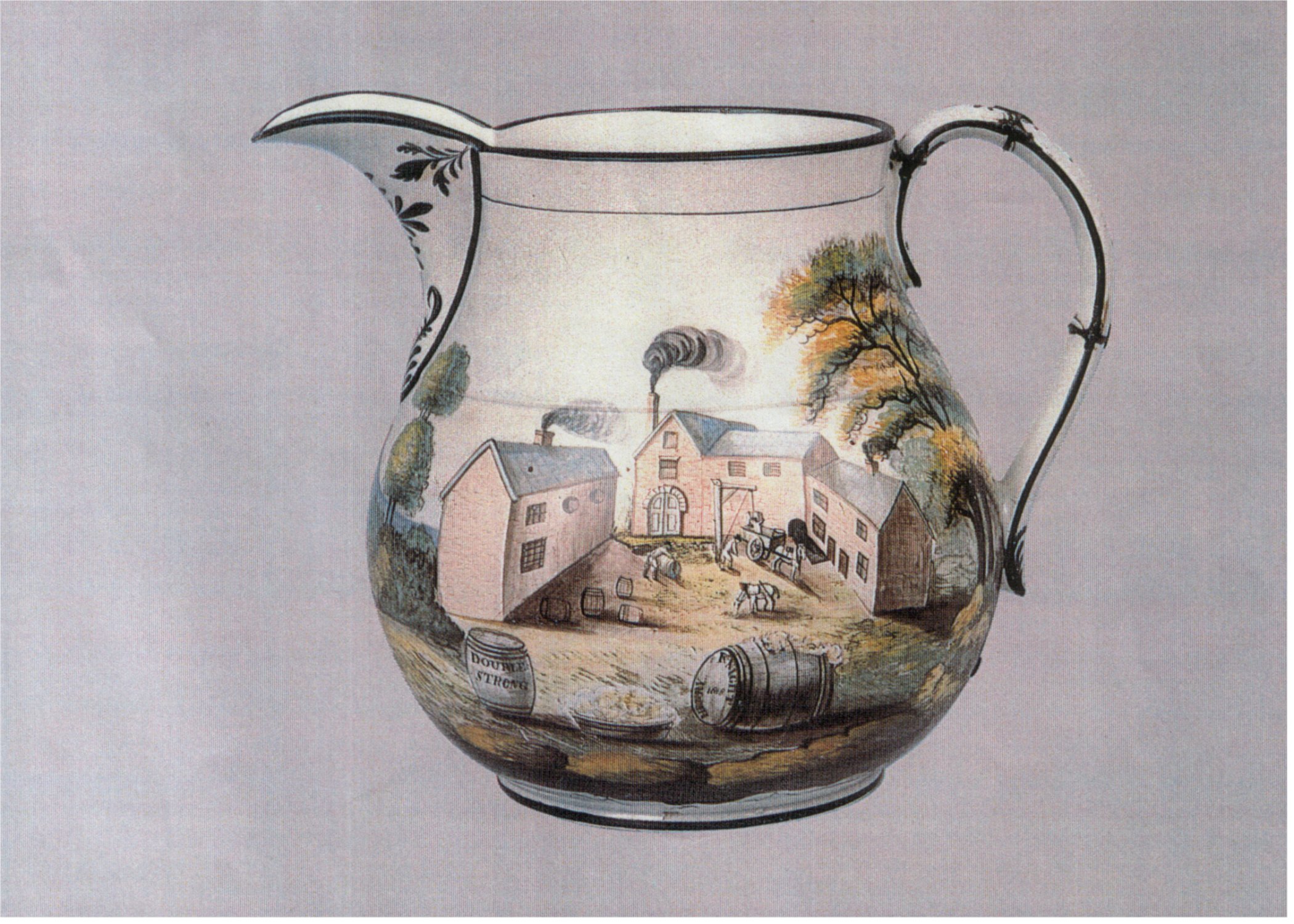 There’s been a long history of brewing in Nantwich, after all the Great Fire of Nantwich in 1583 (when most of the town was destroyed by fire) was caused “through negligence of undiscreet persons brewing”!

James Hall tells us the town had ale tasters – officers appointed by every court-leet to see that bakers made good bread, and brewers strong drink. The Parish Register records the burial of an ale taster, during his year of office: “1758 June 13, John Savonry, ale-officer” [Buried].

James Hall also tells us, when discussing Nantwich tokens (a form of currency in the town), that Richard Bickerton (who appears on one of the tokens) was a brewer by trade, and died in 1669.

In the Cholmondeley Estate records, there are references to a Francis Johnson of Namptwiche [Nantwich], beer-brewer in the 1690s.

Many pubs would brew their own beer on the premises.  In 1789  Mellor & Pass are shown as maltsters and dealers in spiritous liquids at the Bowling Green on Monks Lane.

In The History and Antiquities of Nantwich, by John Weld Platt, dated 1810 there is mention of a brewery at Porch House, on Welsh Row:
“This house, in the reign of Edward IV, was in the possession of H. Wettenhall Esqr. of Dorfold. Since that period it has been erased and on its site is the extensive brewery of T. Brooks Esqr. of Liverpool.”

Townsend Brewery was a large brewery at Townsend House on Welsh Row, not far from Porch House. 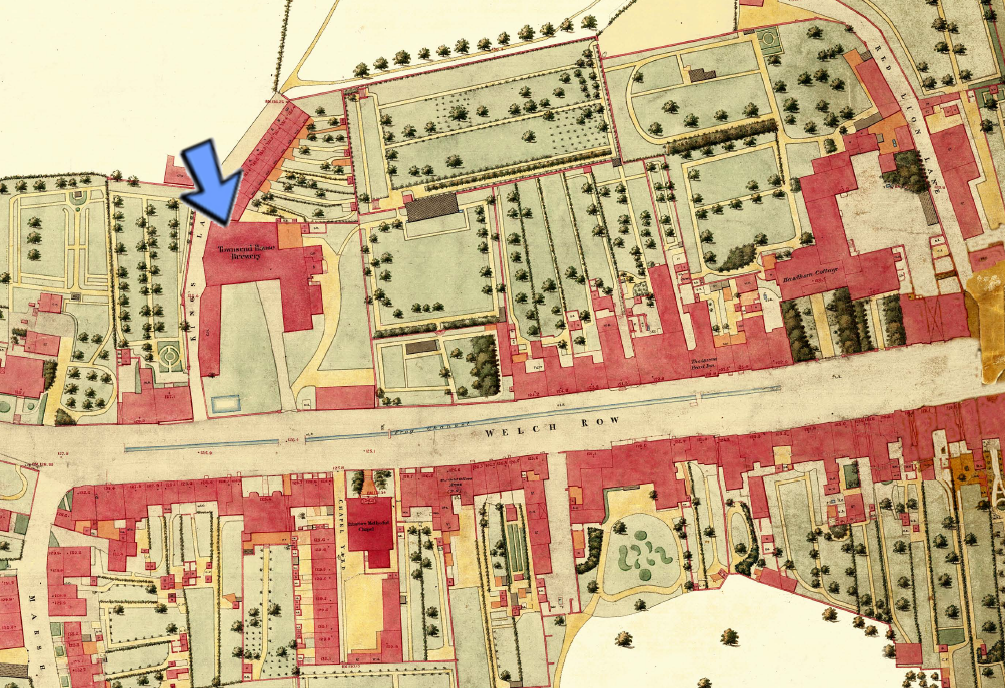 The blue arrow on the above map show its position in an 1851 map, off King’s Lane, almost opposite the Oddfellows on Welsh Row. The garden of Townsend House dates back to Elizabethan times.  Nantwich Walled Garden are campaigning to have  this important historical site saved.

James Hall says “In and previous to the year 1824 the house had been reduced and converted into a brewery, and in that year was occupied by Messrs. George Brooke, and Quain, Brewers ; and after having been so used for many years, it was at length, about the year 1855, purchased by a firm of Quakers, Messrs. George Harlock & Co., who turned it into a clothing factory and built a new house, still the residence of the head of that firm”.

The rare pottery jug, by Enoch Wood and Sons, at the top of this page and here: 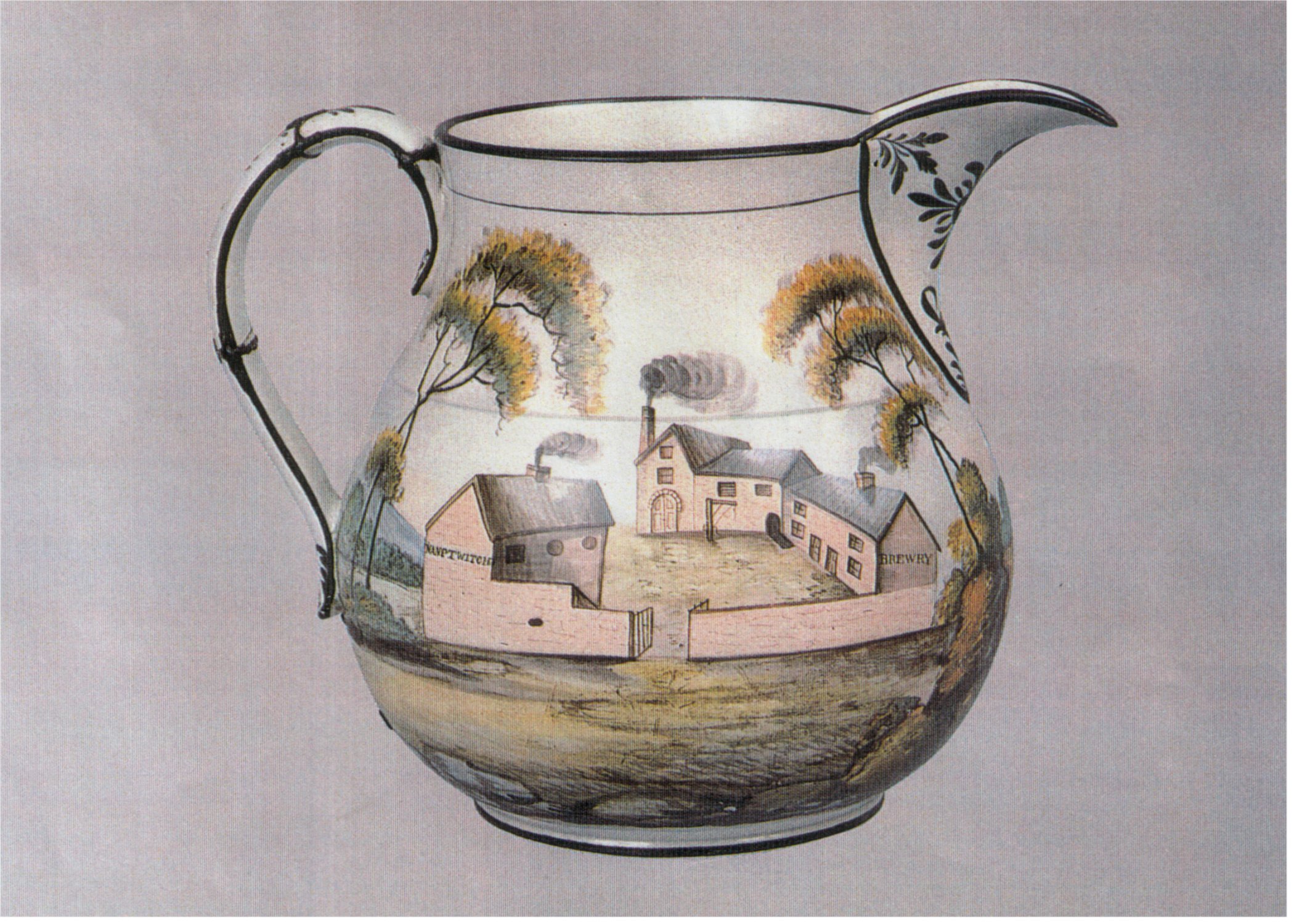 is painted with a view of the “Nanptwitch” (Nantwich) Brewery. It was sold for £6,500 at auction, by Philips of Chester in May 1990,  to a private collector.

One side of the jug shows a walled yard with three buildings, all with smoking chimneys and overlooked by trees. The reverse side depicts more buildings and men, aided by a winch, loading a dray with barrels, one marked “double strong” the other “Knight 1818”. Beeston Castle is visible on a far hilltop.

To be Sold by Private Contract,

TENANTS RIGHT, for a term of Ten Years of and in all that capital and well-established

BREWERY with the Buildings and Appurtenances there unto belonging; consisting of two stables for seven horses, cooper’s shop, an office, and a steam engine of five horse power, together with the stock-in-trade, and implements, on the premises

The above Brewery is situated at the top of the Welsh Row, in Nantwich, in the county of Chester, on the side of the turnpike-road leading from Nantwich to Chester, and is well calculated for carrying on an extensive business,

Immediate possession will be given.

For a view of the premises, and for further particulars, apply to Mr BROADHURST, solicitor, Nantwich.

Situate in the Welsh Row, in or near Nantwich, in the county of Chester, now in the occupation of Mr John Joseph Quane with an excellent Steam Engine and Boiler, Malt Mill, Copper Pans, Coolers, Mash Tubs, and all other Apparatus, upon a most improved plan; and also, Stables, Cart Shed and Offices adjoining, suitable for carrying on extensive Trade in the above line.

N.B. The above is to be sold subject to a lease to the present tenant, Mr Quane, which will expire the first of January next.

If you’re wondering why  Mr Quane was no longer brewing, have a look at The London Gazette 8th November 1833:

THE COURT FOR RELIEF OF INSOLVENT DEBTORS.

At the Court-House, at Chester, in the County of Chester, on the 2d day of December 1833, at Ten o’Clock in the Forenoon precisely.

I’ve also been shown an invoice from the brewery, from 22 October 1831: 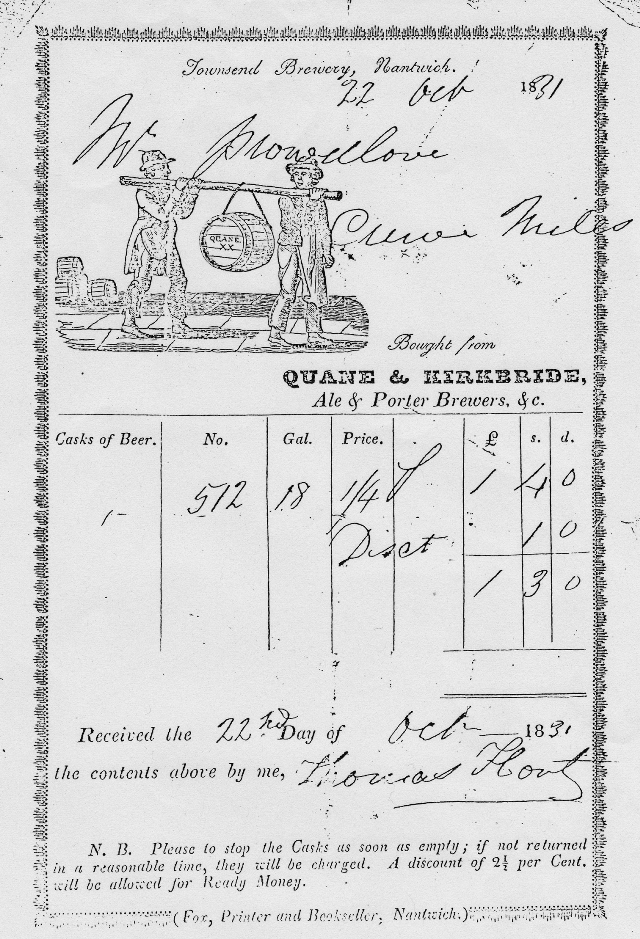 In 1840 Thomas Warcup Kirkbride (brewer) has gone bankrupt but, in the 1841 census he’s on Welsh Row and occupation is a brewer again.  By 1851 the census show him as a brewer and his two sons William and Thomas are both shown as brewer’s clerks.  By 1861 he’s living at Wrenbury, and (at the age of 58) he’s shown as a retired brewer.

There are references to another brewery situated in First Wood Street, site as yet unknown. In 1822/23 Pigot lists the Weaver Brewery as being under the ownership of Paton, Gladstone and Wordley. There is no reference to it in Pigot’s Directory of 1834 but Old Nantwich Rate Books refer to it in 1833 and also mention that the site was originally owned by Macclesfield School (for a Wich house) it then became a brewery and then this was pulled down by Mr Howard (the owner) to make into cottages.

Other Breweries and brewing activities

In the 1792 valuation of the town, there were twelve malt kilns mentioned.

James Smith, on Beam Street, is shown as being a maltster in the 1841 census.

In Morris’s 1864 directory Samuel Joinson is shown as a maltster and brewer at the Royal Oak on Beam Street (he was the landlord of this pub from 1848 to 1841).

John Hardern is shown as a maltster at the Shakespeare Beam Street in 1857.

In Morris & Co’s Directory (1874) there are two brewers shown in Nantwich, Thomas Poyser on Welsh Row and the Prince Brothers on Mill Street:

Also in Morris & Co’s 1874 Directory, Cawley & Perrin (who are also wholesale and retail ironmongers) are shown as hop merchants, and also William Cliff and William Sandford, all on the High Street.

Three maltsters appear in the town, Cliff Williams again on the High Street, Samuel Joinson at the Royal Oak on Beam Street, and Prince Brothers on Mill Street.

Slater’s Directory in 1890 tells us that there was a brewery run by Walley & Dutton at the Cock Inn on Oatmarket (now Teresa’s Ice Cream Parlour).

The history of brewing in the area was continued more recently by the Woodlands Brewery, which was 3 miles South East of the centre at Meadow Lane Farm, Nantwich.

This page will be continued when I find more information.