Historically fairs in Nantwich have always been connected with religious festivals, and three main fairs have been held:

The earliest records go back to the 13th century, when Bishop Burnell on the 19th May, 1283, obtained the privilege of a chartered fair at Nantwich.

The biggest was the Bartholomew Fair, which was also known as the Old Fair, Great Fair or September Fair. This fair was originally held on the feast of St. Bartholomew and for four following days. In later years it was held on just one day, on the 4th September.

The fairs were a mixture of business and pleasure. Livestock, clothes and hardware would be bought and sold, and labour recruited. According to James Hall, the fun of the fair used to include “bull, bear and badger-baitings; cock-fighting; sack-racing; bolting hot porridge or dumplings (barm-balls, or barm-baws, as Nantwich people called them); swarming greasy poles, and grinning through horse-collars”! He also says “In former times vendors, in order to attract buyers, were accompanied by jugglers, minstrels and buffoons; hence this fair became the great pleasure of the year, and often the scene of riot and dissipation”.

In an 1806 List of Fairs (in the Cooke Topographical Survey County Cheshire), three fairs are listed in Nantwich on March 15th, September 4th, and December 16th with cattle, horses, cloaths, flannels hardware, pewter and bedding being mentioned.

In 1819 a fourth fair was added, the New Fair (June Fair) which held on the second Tuesday in June.

Andrew Lamberton managed to find an article on Nantwich Fair Music, written in the 1960’s by Geoffrey Nulty. 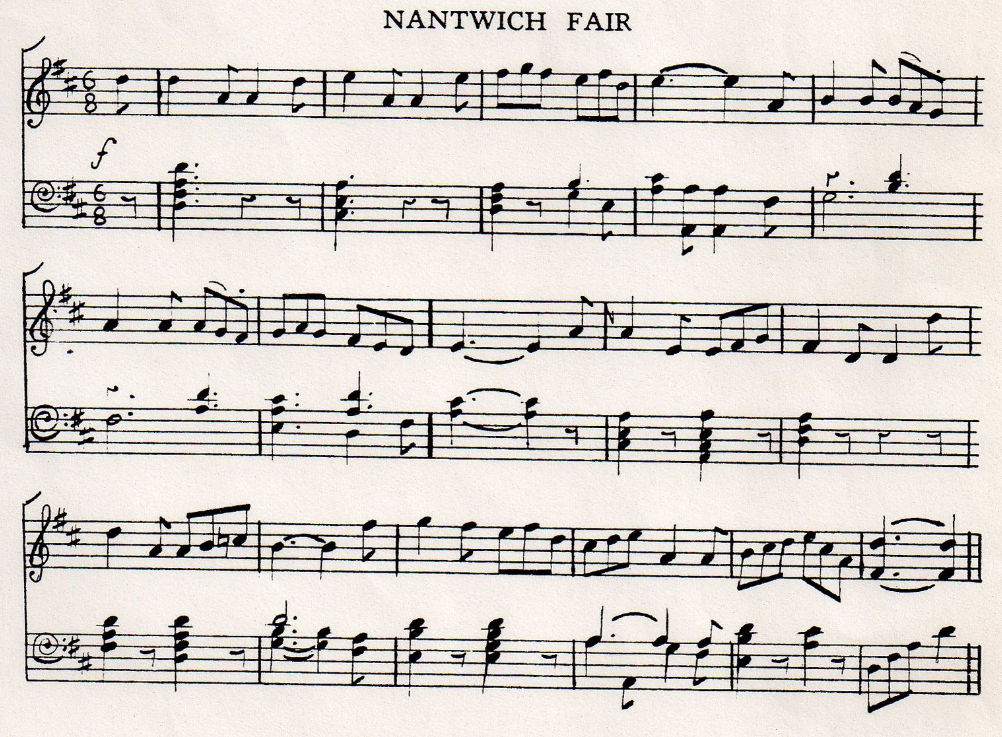 In the article it says “Yet the tuneful air reproduced with this article, entitled “Nantwich Fair”, has not been heard in the town within living memory and modern Nantwich does not seem to be aware of its existence.  The Traditional Tune Archive suggests that the tune was published in 1758, see here.

I wondered what Nantwich Fair sounded like, so sent the score to Pete Anderson (Professional Wedding Pianist) who’s kindly provided me with a recording:

It’s quite a catchy little tune, isn’t it?

Did you know that the Simons and Greatorex fair had a base in Nantwich?

John Greatorex (1846-1943) was a photographer who did magic lantern shows and became a fairground owner. He had a base in Nantwich, and helped form the United Kingdom Van Dwellers Protection Association in 1889 (which later became The Showmen’s Guild of Great Britain).

John had nine children, all were born showmen. Their rides included dodgems, electric galloping horses’ and paratroopers. You can read more about him on David Greatorex’s site here.

There are also some great pictures of fun-fairs in Nantwich, on the National Fairground Archive here.

In recent times there have been new fairs/festivals that take place in the town like the Jazz Festival, the Food Festival, Weaver Wander Classic and Sports Car event, and the Words and Music Festival as well as street entertainment which continues to attract both locals and visitors.