Many of us have seen re-enactments of the Battle of Nantwich, but what was life like for the residents of Nantwich up to, and during, this battle?  Life in the Parliamentary garrison town is examined through the eyes of four fictional characters, a lady from the upper echelons of society, a felt maker, and two young people who variously comment on aspects of life at the time.

The exhibition outlines the key trades in the town, identifies the key characters of the conflict, how it developed, how the town defended itself and various events in the lead up to the siege and its relief through the Battle of Nantwich. 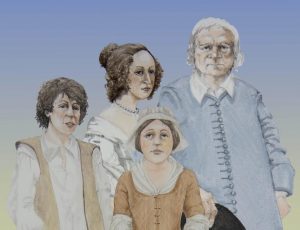 The time is illustrated through lavish illustrations prepared by museum artist, Les Pickford, including a mural depicting a scene in the town on market day. A further dimension is provided through displays of artefacts of the time, replicas and authentic clothing.

Thomas Malbon was a lawyer who wrote a diary of local events during the Civil War. That diary still exists and is a key exhibit in the exhibition enabling visitors to read for themselves some of the events as recorded by the hand of one who witnessed first hand the siege and relief of Nantwich. For the first time the battle will be depicted by a large scale model of the scene on the day of the battle: 25 January 1644.

Nantwich Museum has announced a series of walks and talks to complement its “Nantwich Besieged” exhibition which opens at the museum on Thursday 21 July. The exhibition will examine life in the town during the English Civil War. The following talks have been arranged:

Unless otherwise stated, all talks will begin at 3.00 pm. Tickets are available from Museum Reception: £3.50 (Museum Members £2.50.) Booking is strongly recommended to avoid disappointment.

There will also be a series of walks beginning on Friday 29 July at 2.30 pm, a Battlefield Walk (including Acton Church) led by Julian Humphrys of the Battlefields Trust. Adults: £8.00, Children under 16 years: £4.00, Family ticket (two adults + two children): £16.00, Museum and Battlefields Trust Members: £6.00. Booking is recommended. Full details are available from Museum Reception.

Guided tours of the town, with particular attention to the time of the English Civil War, will also take place on Sat. 6 Aug., Thurs. 25 Aug. and Sat. 10 Sept. The town walks begin at the Museum at 2.00 pm. Tickets: Adults £3.50; Children £2.00. Once again, booking is recommended.