This timber-framed, three-storey, black-and-white building was probably built after 1583 fire. 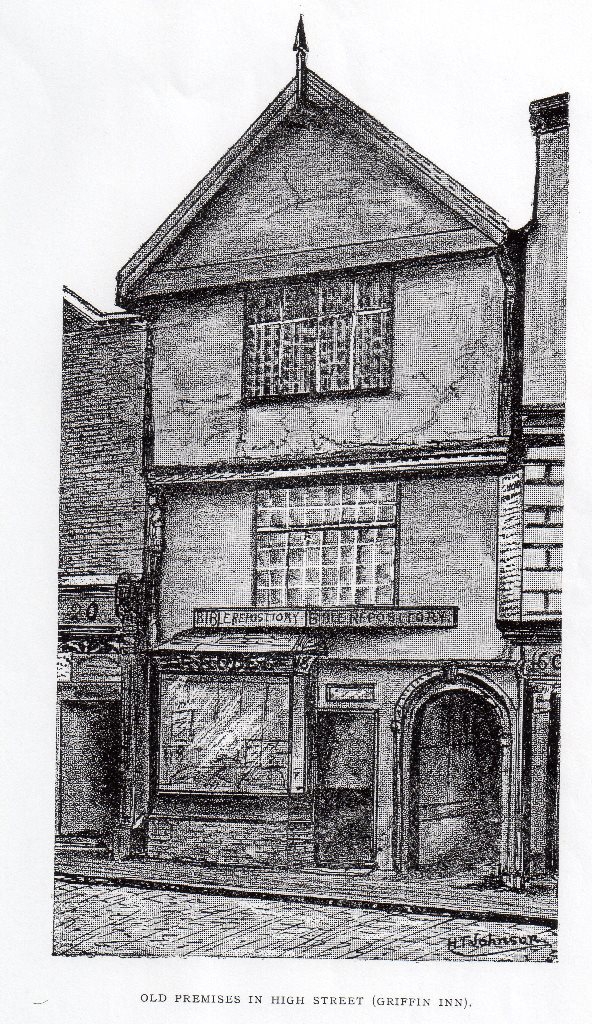 The picture is owned by Nantwich museum. It’s interesting to see what the artist has written on the back:

In the old coaching times of Cheshire this was “The Griffin Inn”, the coaching house of Nantwich. All mail coaches changed horses and passengers here, up and down the West of England.

The inn was also famous for past time sports such as Cock Fighting and Bear Baiting Pits until Mr Edwin Rhodes of Churches Mansion bought it for a Fancy and Toy Shop as shown in the picture. In later years Mr W Johnson, draper of 16 High Street, had it rebuilt as it is now known as Warwick House, the property of Mr St John Butt.

Painted from the original sketch in 1885 by Herbert St John James, Nantwich 1937.

The picture will form part of the Nantwich at Play exhibition, which will be held later this year in the museum.

Some of my friends suspect the inscription may not be correct! We haven’t been able to find any evidence in directories, coaching references and newspaper clippings of coaches using the Griffin.

We think it’s very unlikely, as the Crown Inn was nearby, and the Union Vaults (specifically built as a coaching inn) was at the end of the street. There’s no evidence on any maps of any stabling, so where would the horses come from? Coaches to the West of England left Chester for Shrewsbury down the Whitchurch Road. Coaches through Nantwich usually went via Stone then either via Lichfield, Stafford or Wolverhampton to Birmingham and south to London.

Evidence exists for coaches stopping at the Crown, Union Vaults (now Union) & Three Pigeons. The only time it might have been used was when Welch’s Omnibus started a short-stage coach from Nantwich to Crewe Station to meet the trains (1837-1845) – this picked up at all the major inns in the town.

2 thoughts on “The Griffin”