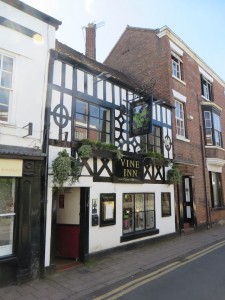 The Vine Inn, in Hospital Street is one of Nantwich’s oldest pubs. It’s in a lovely 17th century building. It’s a two-storey rendered building, with a sham timber frame in addition to the original timber frame. A mirror in the pub suggests that it was opened in 1641. There used to be an outside passageway, which is now part of the pub. There used to be two bars, separated by a courtyard. You can see where this was, there’s now a glass roof.  When you go inside the building the floor is lower than street level – I’m not sure why this has come about.

You can see the pub on the 1851 map of the town. Unfortunately it’s on the join of two sheets, which I’ve had a go at putting together here:

A neighbour of the The Vine, George Latham, (who was an architect) complained to the Local Board about a Mr Wright at The Vine, who was keeping a pig. He was concerned about immediacy to the potential porcine scent.  However a special sub-committee of the Local Board paid a visit and considered the pig to be so cleanly kept that no nuisance had occurred!

The pub is currently owned by Hydes Brewery, an independent brewery in Manchester.

The Vine normally demotes a place where wine is sold. Wine has been (and still is) sold in this pub, but I’m not aware that this was ever the main drink of choice.  Buildings at the back of the property are called Vine Buildings, but I don’t know if they were named after the pub or if the area ever had vines.

There have been reports of a ghost, but it’s not been seen. Some say rooms go cold and clammy and objects in the cellar move from original positions. Original outside passageway, which is now part of the pub, is supposed to give a ghostly and cold feeling. Did something happen in the passageway years ago?

The information on landlords below is taken from the 1792 rate book, The inns and innkeepers of Nantwich – by A J MacGregor, census returns and Johnsons Almanacs:

In the 1851 census a 37 year old schoolmaster, Peter Eaton is shown as a border – suggesting it was a boarding house at that time.

Click here to read about an alleged perjury case involving the Vine.

3 thoughts on “The Vine”