Alvaston Hall is an attractive property in South Cheshire, which is now a hotel. It’s situated 2 miles from the historic town of Nantwich on the Middlwich road, surrounded by green fields. Its owners had quite different ideas of what the property should look like, and as a result it’s a wonderful mixture of Old English, Queen Anne and Early Georgian architectural styles.

From Saxon days Alvaston was a dependant township of Nantwich, which had become the north of England’s most important salt producing town. Here there was an open landscape of grassland interspersed with gorse. furze and the remains or the ancient oakwoods where the people of Nantwich had the common right or grazing their livestock, and other privileges such as foraging for broken and dead wood to heat their homes. The whole area was almost jealously guarded from outsiders: there were no hedges then.

A man called Aelfgar came here about 1000 years ago, built his “ton” or farmstead, and thus gave his name to Alvaston. In the thirteenth century the lords of Alvaston cleared the land surrounding Alvaston Hall – much to the annoyance of Nantwich folk as this land belonged to Beam Heath, and in 1285 the big bad barons agreed to leave Beam Heath alone. Perhaps they built a farmstead on this site: a contemporary document refers to land and a house at Alvaston rented to the heirs of Agnes, daughter of Adam de Burton, for a “pair of white gloves”.

Where the hotel is now situated was the site of the Nantwich Racecourse which closed in 1823.

In 1824 the land surrounding Alvaston Hall; which belonged to Beam Heath, was enclosed by Act of parliament with straight hawthorn hedges and the present drive, straight as an arrow, was then built. The people of Nantwich opposed the parliamentary enclosure of Beam Heath as it endangered their common rights – especially for poor people, and the rest of their land was not enclosed until the 1870s.

In the early nineteenth century there was a house, known as the Grove, and owned by a busy Quaker, banker and farmer called Croudson Tunstall. This map from Bryant shows the area in 1832: 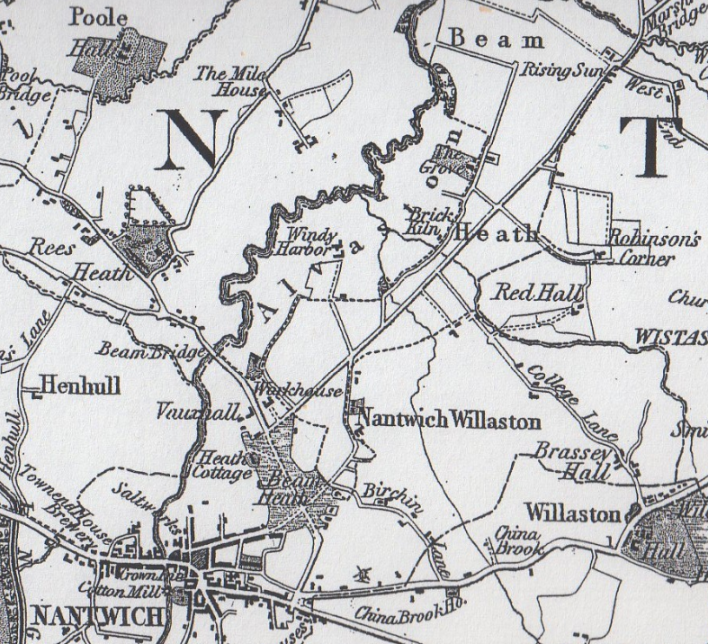 It was then bought and rebuilt by a Mr. Francis Massey.

In 1896 Mr. Arthur Knowles, a wealthy Manchester industrialist, who had been involved in the Cheshire Hunt for many years, bought the Grove and changed it into a grand country house. It was renamed Alvaston Hall, and Mr. and Mrs. Knowles soon turned it into one of the centres of Cheshire social life. The architects responsible for the rebuilding were A. Steinthal and Edward Salamons, who both came from Manchester. Edward Salamons’ most important commission was for Agnews, Bond Street, London in 1877.

The style was “Picturesque” or “cottage ornée” which used a hotch-potch of all kinds of architectural styles to lend its buildings a rural and romantic atmosphere. The effect is enhanced by the lack of symmetry, the mock timber framing, the pinnacles, the crested ridge tiles, the gargoyle rain heads on the great projecting porch and the pretty clock tower. Inside we find “Elizabethan” panelling and ceilings, “Georgian” Fireplaces and ceilings, the ceremonial Chinese style staircase and a fine “Baroque” boudoir.

The magnificent hall was used as a living room and has a fantastic stained glass window, built in the fashionable country house Gothic Revival style, and a large fireplace with Italian ironwork.

The billiard room was demolished some time and opened off the white panelled ladies’ drawing room, which once opened into a conservatory. Arthur Knowles spend much of his considerable fortune on Alvaston. He built lovely grounds containing a cricket pitch, tennis courts, a great barn-like building which housed one of the first electric systems in England, and the pretty stables and lodge: these grounds were enclosed by a stone fronted ditch or “ha-ha”, and the present drive was built and planted either side with lime trees so as to give any approaching visitor a tantalising glimpse of the Hall. The stables housed his private string of race, carriage and hunting horses. He was particularly interested in the breeding of blood stock for racing and his race horses won many sporting events. One of these horses, Jack Tar, was so successful that one night he was stolen from his stables: the thieves covered his hooves with velvet to dull the sound of his abduction, and after a frantic search during which every Post Office in England was kept open and every police officer in Cheshire was on full alert the horse was found abandoned in Holmes Chapel – too late for the race!

After an afternoon at Haydock park races in 1929 Mr. Knowles fell ill and later died. He had a simple funeral in which a farm lorry carried his coffin to Wistaston Church, where he was laid to rest next to his wife, who had died tragically in 1913. The “Goliath of the Manchester coalfield” was no more: the business had already started to decline amid the first rumblings of the depression. Alvaston Hall and its contents were auctioned in 1930.

After a succession or private owners, Alvaston Hall was converted into an Hotel in 1964.

In 1972 the present Company purchased the Hall  with only 10 “lettable” bedrooms. They tastefully converted the Victorian Servants Quarters, the Stables, Coach-house, Engine & Harness Rooms into a total of 42 Bedrooms and in 1980 was added the South Wing with 18 more rooms.

Local stories of Alvaston and its past glories are nearly all legend and “gossip”. The stories of Cock-fights in the great Cheshire Barn (still existing in the grounds) are true, but more difficult to believe is the story of the young wife of a past owner who died whilst throwing herself from an upstairs window fearing the House was on fire! As a result the husband committed suicide by drowning himself in the nearby River Weaver. There appears to be no documentary evidence to support this story but it is a fact that one heir to the property shot himself-many years ago and at certain times customers of a “SPIRITual” nature have seen the Beautiful Ghost of the young Victorian Bride.

Situated in the grounds of Alvaston Hall Hotel is a memorial to the Royal Engineers Bomb Disposal Unit:

On 17th August 1940, six men from the Royal Engineers Bomb Disposal Unit were sent out to attempt to disarm four German bombs, which had not detonated on impact. I’d assumed that this would have been an attack on Crewe works, but after reading this site I  found out that it was a German bomber, on his way back from a raid on Liverpool, who had decided to jettison his bombs over Nantwich.

The men – Sergeant Edward Greengrass, Sapper Harold Thompson, Sapper Michael Lambert, Sapper Albert Edward Fearon, Sapper George Lucas and Sapper John Percival – successfully defused three.  However when the men tried to defuse the bomb near the the memorial, it exploded and at least four of the men died instantly.  In the next two days John Percival and Edward Greengrass had also died.

Due to issues of security and morale, the incident was kept quiet during the war, and the mens names didn’t appear on the war memorials in Crewe or Nantwich. Recently the Crewe Branch of the Royal Engineers decided that a memorial should be erected, and this monument was unveiled on Sunday, 7th October 2012.

Alvaston Hall is now a hotel owned by Warner Leisure Hotels.  It has its own nine-hole golf course and a health club, pool and cabaret restaurant. It recently received a £12.5 million redevelopment.