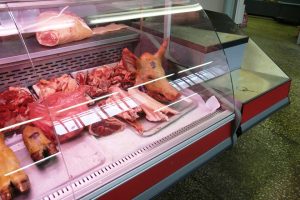 It’s interesting how many of our common phrases come from pigs! Making a pig’s ear of things generally means making a mess of things, and is possibly connected with making a silk purse out of a sow’s ear (when things have gone horribly wrong! Living Cheek by jowl can refer to rather crowded conditions, but do you know where a jowl is? It’s part of a pig. Worryingly you may have eaten pig’s jowls, without even knowing it.

What’s in a sausage?

It’s surprisingly hard to know exactly what’s in sausages – thanks to some of the food industry who are keen to disguise what they’re doing.  The Products Containing Meat etc. (England) Regulations 2014 tell us that the minimum meat content is 42% (less than half) for pork sausage.  When it doesn’t say pork you can get away with 32% (less than a third) meat content.

When you look at what’s in the meat in some sausages (especially the cheaper ones), you may be relieved that the meat content is so low. It’s fairly obvious what pigs’ cheeks are. As the phrase “cheek by jowl” implies, the jowl isn’t far away from the cheeks in  a pig. Food journalist Felicity Lawrence, in an article called Sausage Factory in the Guardian, tells us “the jowl is the bit of the pig from the ear hole to the end of the snout, which is cut off, deboned, skinned and block frozen”.

Water, fat and rusk are cheap ingredients commonly used in sausages. I looked at the ingredients for Richmond “proud to be the nations favourite” sausages :

The casings of these Pork sausages are made from Beef collagen. Collagen occurs in many places throughout the body, it doesn’t state which part of the their collagen comes from. Cow hides for instance are used in sausage manufacture.

Pig meat frequently comes from the continent, where standards are different to the UK. Last year press reports told us that Public Health England confirmed that the UK’s biggest retailer (Tescos) had been identified in a study as the potential source of Hepatitis E virus in the UK. You don’t expect to get hepatitis through eating pork!

I’ve not even mentioned animal welfare. So I would definitely think twice before buying cheap sausages…..

One thought on “Making a pig’s ear of it?”