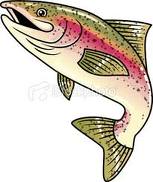 I’m no fisherman, but I’ve reproduced this article, which appeared in the Chester Chronicle on the 4 July 1914, as I love the way it’s been written!

THE END OF THE BIG TROUT

The monarch of the flood gate pool is no more. His obsequies celebrated were with due regard to his history, size, and length on Monday evening. He had lived an eventful life. Every Nantwich fisherman knew him, and it accords with eventful history to say he knew every Nantwich fisherman, was very familiar with every lure of the tackle maker’s art from dry and wet fly to artificial minnow and spoon, and had with more or less disastrous results to those who had flattered to deceive, every live bait from lob worm to pink tail. He was an educated trout, possessing the wisdom of experience as to be able to tell the difference between a natural May fly, a black gnat or dun, and other creations which were made to float with paraffin. One almost regrets his end, he was such an authority upon practice and cunning and proficiency. He had worsted so many in battle, had flaunted his proportions so magnificently and fearlessly and had defied so many legions that one had to regard him as legendary trout of the flood gate pool.

He must have been hungry and reckless on Monday evening for a Devon minnow — one among hundreds that had been thrown over him — made him a captive where the water from the overflow rushes away to the calmer depths of the pool. He died, however, in manner which was worthy of his 22 inches with fitting eulogies upon the crimson jewels, which studded his shimmering sides. He weighed when scaled 3½lbs. He was caught by Billy Betteley, the old Nantwich football player, who besides being a good fisherman is also a good sport. He was one of fishermen who only weigh in in order to assist the stocking fund. I congratulate him.

ANGLER OF THE WEAVER