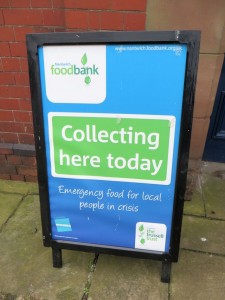 I’ve always felt uneasy about foodbanks. Don’t get me wrong, they’re run by kind and caring people – who care pasionately about some very vulnerable people. However, I watched an academic debate about foodbanks, and realised that I was right to have concerns.

I think it should be a basic human right to be able to have some choice about what you eat. I’m not talking about whether to have beluga caviar or foie gras (and I wouldn’t want to eat either). I’m talking about the right to choose my own basic food items. I can’t imagine how I’d feel if my diet consisted of items chosen by others.

The Trussell Trust, a Christian charity, is the main  organiser of foodbanks in this country. They are also the main source of information/statistics (which the debate I watched felt was a cause for concern). Their site shows nearly a million people were being helped last year:

and I fear this figure is rising.

The Trussel Trust ask for donations of the following items:

So where’s the fresh and healthy ingredients like fruit and vegetables? I realise why they’re not asking for these items – it’s not very practical for the operation they’re running.

So if you’re destitute, our society now thinks you should live on sugary processed goods (to help your health deteriorate)?

I have a particular problem with fruit juice: 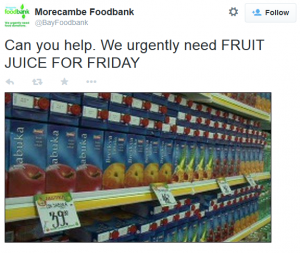 – because it includes the word “fruit” many people think it’s a healthy choice. As someone who has diabetes I know it makes my blood sugars soar (and crash) almost as fast as pure sugar. That leaves me feeling first tired and then irritable, and once your blood sugars become unstable it’s a job getting them right again.

The politicians like foodbanks, as they can pretend the problem is being dealt with – at no cost to them.

The supermarkets also love supermarkets, as it’s an opportunity to increase their sales and pretend they have a conscience! You see messages like “Buy an extra tin and leave it on the way out”. Wouldn’t it be better, from a logistics point of view, to ask for cash and buy exactly what was needed (in bulk from a cheaper supplier)?

In Each One of Us is Precious, Eddy Knasel talks about inequalities in pay, and how the rich are getting richer and the poor are getting poorer. That article led me to read The Spirit Level: Why More Equal Societies Almost Always Do Better by Richard Wilkinson and Kate Pickett.  It is hard to think of a more powerful way of telling people at the bottom that they are almost worthless than to pay them one-third of one percent of what the CEO in the same company gets…

So when politicians come knocking on my door, I’ll be asking them what they intend to do about food poverty – so that foodbanks, like slavery, can hopefully become part of our history.